Reactor Pearl covers are used in the Electrify Pearl. They are 1500 grit polished. This ball has a slightly stronger hook than the Electrify hybrid and will make it seem surprisingly easy. 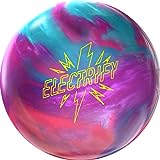 The Circuit symmetric core has the lowest RG in Storm’s Hot Line. This means more versatility and better performance. These two bowling balls can be paired with the Electrify hybrid to make a powerful 1-2 punch in your arsenal.

Storm designed the Storm Electrify Pearl bowling ball line to provide value and control in motion. These balls are great for both beginners and professionals. Circuit Core is used to provide accuracy in the Electrify Bowling Balls. This ball’s Pearl version features the Reactor Pearl coverstock, which provides control and minimal motion on medium to light oil.

The Storm has released two new Hot Line releases, the Storm Electrify Pearl. The Electrify Pearl is a great addition to your shelf. The pink, light blue, and fuchsia swirl look fantastic on the wall or down the lane. The Electrify includes the new Circuit Core, Storm’s entry-level cover: Reactor.

The Circuit Core has a lower RG and lowers diff core. This is the biggest difference from the Match Up line. The balls are very easy to control. This ball is different because of its pearl cover. It allows for smooth ball movement and a faster ball. It reminds me a lot of the Roto Grip Scream, but with a little more hook and hit.

About core Storm said next – Circuit Core is the ultimate baseline weapon featuring a lowered RG, midrange differential, and laser-like precision. This core will undoubtedly be the best for all types of players.

It was first tested in a new house, which I shot for the league. The house had plenty of friction. It was so easy to get the ball downlane without it reacting too much. It was difficult to get slower ball speed, so my misses were more splits and washouts. I found that I had an amazing hold when I focused on rolling the Electrify balls to the right. This allowed me to have enough go back to open up the track immediately. The transition went smoothly with a few hand position adjustments. I didn’t feel the need to change balls up until the transition, which is quite substantial on this surface. This forced me into the 4th arrow.

This ball is great for oil patterns with lower volumes/medium lengths and houses that have a lot of surface friction.

There are two options for lighter oil conditions in the Electrify series: Hybrid or Electrify Pearl. The new Circuit core will be matched with the Reactor cover. This will give bowlers an option when lanes are not hooking as much and require control and cleanliness.

The Hybrid is a good choice if you want something early. If you prefer something with a more angled look, the pearl is a better option. I think this piece will be great in two different environments. This is something I could see myself using after a long block. A weaker core combination and possibly early in blocks are needed in houses where fronts hook very early. You need a ball to clear fronts while still maintaining control at the back end.

I play bowling for over a decade. I was looking for something that would complement my IQ Emerald. It drilled pin up 3X3 (non-pin buffer drilling), and I was getting the great length and pop.

I used Electrify as my cover and went 3 1/2X3 using a pin in the ring finger. I was trying to make a smoother “step-down” ball for the IQ Emerald. Although it was a failure, I did create a “little brother” type ball for it.

These two are inextricably linked on our “normal” house shot (at my “oily”) house. Actually, this ball shows the best performance on medium to lighter oil lanes. The Emerald IQ flips faster and takes longer, while the Electrify starts a bit quicker and goes smoother. This was surprising, considering the Electrify RG numbers. I usually line up in the same spot, but the Electrify creates a lot of an arcing reaction.

I liked the way the Hybrid rolled after drilling it. This gave me a positive feeling about the Electrify Pearl. Knowing that the RG is 2.51 with a differential of.030, I knew that I needed to drill the ball fairly strong so it would flare enough when I wanted it to be used. It was drilled the same as the Electrify hybrid (5 x 4-). With a slight shift of the CG, this places the pin above my bridge. To speed up the response time, I used a 3000 pad to polish the shine.

The Electrify pearl has the greatest success when the lanes are in transition and the pattern is blended out. I have seen players with lower rev-rates using the Electrify Pearl when their Omega Crux is too strong. It can also be used by higher rev-rate players when they need to create an angle through the front or have a quick response down lane.

The Electrify pearl is a great option if you are looking for a ball to friction at a low price.

Right bowling shoes, and a good bowling ball – two parts of an excellent game. For those who want something less powerful and more manageable, the Storm Electrify Pearl is an excellent choice. It is 4-5 boards smaller than the Electrify Hybrid but still has a controlled backend.

The Electrify Hybrid has been a superior prize line, and it is no different. This is the weaker of both Electrify’s, so it will need some friction. However, it’s going to be a great choice for those who want a ball to get them through some hot fronts.