The fourth entry in the Idol series, the Roto Grip Idol Synergy, is the first to use a hybrid coverstock. Actually, this is a great league ball. The hybrid eTrax cover wraps the symmetrical Ikon core to create a responsive back end motion that increases oil traction. This is in contrast to the Idol Pearl. High flaring, low RG core design, and aggressive polished coverstock create an Idol that works well with medium oil. 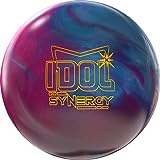 Cranker was impressed by how fast this ball passed through the front on our medium oil pattern. The Idol Synergy provided more area at the breakpoint thanks to its better oil traction and greater back end than the Idol Pearl. He could play further right on the fresh than the original Idol and both the idol bowling balls could stay up the backside of the ball to get to the pocket much more easily.

Six weeks ago, I decided to drill a 14-pound bowling ball. Because I wanted to see the differences and make any changes before I started over, I only did two balls. My primary motivation was to increase pin carry at the one bowling center I play in this year’s league. It’s a place I haven’t been consistent at in my 30 years of bowling. I’m now bowling there every week and I’m shocked at how much I can strike there.

After trying different equipment and angles for the first 8-10 weeks, with no success, I decided to go with a 14# ball to see if it could be rolled differently and create different pin action (or better). After a five-week stretch of throwing 14# balls, I decided to empty my car (don’t leave your balls in the car) and start again with a 14# ball arsenal. I added the Idol Synergy to my two previously drilled balls (Nuclear Cell, IQ Tour Emerald), and I was hoping it would fit in between them.

I was immediately impressed by the Idol Synergy’s ability to read friction quickly. This ball hooks very quickly from the dry for a symmetrical core ball with a round core shape. This ball hooks faster than my Nuclear Cell at times, although it is not something I would want it can be very useful.

The length of the product is longer than my Nuclear Cell but it reads earlier than my IQ Tour Emerald. This product is average to above-average in length. I haven’t encountered any house or sport conditions where the front of the bowl was trouble for the Idol Synergy.

The standard league patterns and house shots are where I have had the best results with this product. I find it a bit too skid/flip in sport conditions. This ball is very solid and has a quick backend reaction. It’s a piece Roto has been looking for for quite some time. The Idol Pearl was not a hook for me until it really dried. I felt that there wasn’t another shiny, symmetrical core ball in their lineup that was compatible with the “mediums.” It certainly does.

It’s not something I’ve tried with any other surface, but I don’t feel the need. I also like it too much straight out of the box. It feels like it would be able to handle a sanded surface. Scuffing is a common reaction for symmetric balls in this range of rg/diff.

Their HP3 line has always been dominated by the Roto Grip Idol line. These balls are a popular choice among touring players. They are easy to read in the mid-lane and have predictable backend motion, making them suitable for many situations. Even the Idol Pearl felt smooth and mid-laney to me. I found this made them more suitable for sport conditions.

Although I love the predictable motion, it was something I wished for. I wanted a faster version that would be easier to use for covering boards in house shots. I also prefer a cleaner and more consistent ball. I was very pleased with the New Idol Synergy. The synergy maintains a great shape and responds faster to friction. It doesn’t matter how many lanes are clogged, it still comes around. And most importantly, it can still be gotten down-lane.

This hybrid cover may surprise you, but it is the cleanest version of the idol. There have been a few balls that I found similar to this one, including the Storm IQ Fusion. For me, the fusion was faster and cleaner than the IQ pearl. But both the performance is good, and these are two legendary balls in my opinion. It ended up being my favorite release from that line. The synergy is for speed-challenged players, rev dominant players, and speed-challenged players who desire the same thing that the idol pearl offers the guys who throw harder.

After a surface modification, we decided to do a quick review. We used 1000 grit, then 3000 grit abralon. This should make the ball read faster and reduce some laboring behavior that we saw in the box. This made the ball feel a little stronger, which is quite logical. A ball that has more texture reacts better to ball movement. It was more consistent. It is not surprising that it continues to shape the same way, and pushing me in meant increasing incrementally the risk of flat hits.

Sean also gave it a try. It was transformational for Sean. He couldn’t pass it up. It went from excellent pocket control with some under/over to great pocket control and great carry. The ball’s motion and extra traction can be better utilized at a higher rev and speed.

Bryan finally got it done. It was slightly better, but not a complete overhaul. He was pushed to the left by more surface, but this just resulted in more boards to cover. It was almost the same reaction but from deeper. Pushing it out was lazy, and sometimes trying to hold on was too much.

It’s the same ball, at the end of the day. It wasn’t transformational to add that little bit of surface. It made a big difference for the faster bowlers at higher speeds and revs. It made a difference for me, but not much. For Bryan, even less so. We gave you the chance to witness the change.

I held the Roto Grip Idol Synergy bowling ball in my hand, with a question mark over it. It felt like I had a maximum score of around 230 when I first threw it. It was about game 15 when I finally got it to the point where the striking light came on. This ball is reliable and can deliver on multiple patterns. It also tells me when it is time to use it.

The Roto Grip Idol Synergy bowling ball has a similar benchmark motion to the Idol line features. I was reminded of some alter egos that the original Idol had a slower down-lane shape. The Idol Pearl was not a sharp shoot through the fronts and snap quickly down the lane. Although the Idol Synergy hybrid is cleaner than the pearl version, it doesn’t go crazy down the lane because of its extra scoot. My favorite Idol versions to date have been Synergy and Pro versions.

My high-rev crew will spank it at the bottom and have some casual fun watching the best form! There have been nights when I looked at 12 but by the end of the night, I was looking at 25 at the arrows. They have enjoyed success with the Idol Synergy with friends whose rev rates range from 250 to 400. This ball mixes patterns and mows pins!

I made my Roto Grip Idol Synergy using a pin layout of 35x4x55. This placed the pin on the ring finger and now idol synergy fits perfectly. This is my favorite type of control drilling. To get the gloss off, I used a 3000 pad with a responsive eTrax hybrid coverstock. Only a matter, what about the advantages of Roto Grip idol Synergy bowling ball?

This layout makes it easy to control my Roto Grip Idol Synergy. It is a bit too controlled, as I have other pieces such as the MVP ATTITUDE and WILD STREAK that help me keep my target in sight. To give the drill a more down-lane move, I think I should have used a pin higher drilling.

This layout is very useful, but I haven’t seen a flat enough design to put it on. To take advantage of the great push and back end that others are telling me about, I will drill a second one with a stronger pin location and pin buffer.

Follow up: I drilled another one with a 70×4.5×25 layout. This layout is much more bally and has a stronger motion at the backend than the pin in fingers. For anyone who wants a second pin in their bag, drill one of your favorite pin positions and add a higher pin buffer.

What do we have to do with the Roto grip Idol Synergy. This ball might fit in the Mid Control category for Sean and me. This is where a standard benchmark ball could fit. To see a consistent reaction, I think you will need to crack the polish. I might have to do another session with the surface to confirm that. This over/under must be controlled.

I believe the Idol Pearl is a better ball for Bryan’s game. Each bowler must decide which ball is best for them. I’m here to provide as much information and support as possible to help you make that decision.